Preaching the Truth in Love Since 1867

In 1867, just two years after the end of the Civil War, God stirred the hearts of two men, Rev. Peter Winebrenner and Rev. George Abbott, to establish a church in the small town of Wakarusa. Winebrenner became the first pastor at First Christian Church where members met in homes before buying the church’s current property for just $75.  It was the first brick church in the area, so for several years it was simply referred to as the “brick church.” 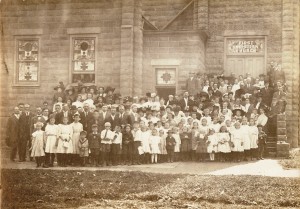 Eventually, the one-room brick building proved to be inadequate to meet the needs of the congregation, so July 4, 1904, it was demolished to make way for a new structure. Men, women and children of the church attached ropes to the walls and pulled them down. They then collected and cleaned the bricks to be used in their new building.

The total cost of the second building (pictured on the right) in 1904 was $7,314.12. While it was being constructed, services were held in an empty church building at the site in Wakarusa known as Bunker Hill. Interestingly, this same site is now the backyard of the residence of the current Senior Pastor, David Harper.

After an expansion of the facility in 1930, tragedy struck when a fire destroyed the building on June 23, 1936. The damage was so extensive all that remained were the cement walls. Only three chairs and the pulpit were saved. 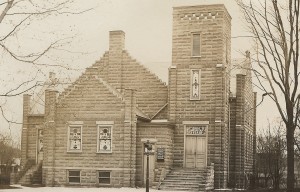 In 1945, the First Christian Church broke away from the Eel River conference to become an independent Bible Church. Then on July 1, 1970 the name of the church was changed to Bible Baptist.